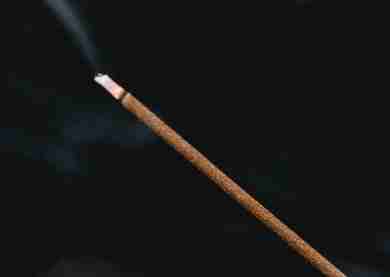 “I hope not”, was my reply to the question, “Do you have anything that smells like fish?” I think my facial expression asked the obvious question because the enquirer explained he needed a fish smell to create a particular atmosphere for a play he was involved in. The only other enquiries we’ve had about fish smells is regarding which incense is best for masking it. (The answer is on this list, so keep reading.)

A more frequent question is if we stock specific incense fragrances that people are struggling to find, and we often do, but if you don’t know which scent you want and with so many different fragrances to choose from, how do you pick? At time of writing we have 73 fragrances of incense and resins. If you want to include fragrance oils, essential oils, wax melts, and scented candles the number of fragrances we stock increases to 138! No wonder people tell us our shop smells nice.

Below we have given a list of our Top 10 Incense Fragrances and the reason we have chosen them. It’s not a list of popularity – that’s a possible blog post for the future – but a list of incenses that people either request frequently or comment on the most. I’ve done it this way because some of our most loved fragrances are not very well known. Others, like the one that masks cooking smells, have been favourites in certain circles for a very long time.

It took us quite a while to find a nice coconut incense that smelled like the real thing rather than some chemical version of it. Every pack in our Auroshikha range has a lovely natural scent, but coconut was the most requested, and is now one of the most popular in this range. Some people just like the smell of coconut, but others tell us it reminds them of their holidays.

When we first opened our little shop in Hull we were frequently asked for “that incense they burn in temples”. We must admit, we didn’t have a clue what it was! Around the same time, a few customers were asking for Palo Santo which we didn’t have, so we decided to get some in. Suddenly, we were being greeted by enthusiastic exclamations of “it smells like what they burn in temples!” Now we know!

One chap came into our shop just before Christmas 2021 and bought our entire stock of Vampire’s Kiss, one of our most popular in the Stamford dark range. It was for his wife and he was hoping her reaction would be the same as the previous time he had taken bag full of it home, wink, wink. I didn’t ask for details, just politely made some comment about how much she must like Vampire’s Kisses. Whilst nobody else has mentioned anything about it having aphrodisiac properties, it is certainly a scent that people love.

The Nitiraj Masterpiece incense is still fairly new to us but is garnering some steadfast support. It’s a slightly more expensive brand but with good reason; each standard-sized stick burns for approximately 1 hour. It’s fairly subtle, but being slow burning it has a fragrance that lingers well. I’m burning a Nanak stick as I type.

Nanak is, according to the writing on the box, an “ancient blend of sandal and frankincense and is dedicated to Nanak, Guru of the Sikh’s, honoured in hearts and shrines through India”. Although sandalwood is a fragrance I wouldn’t normally choose for myself, I think it blends incredibly well with the frankincense which adds more of a base note which I find very appealing.

We have customers who come to us especially for our Buddha’s Blessing, a fragrance in the well-known Satya brand, which they say they haven’t been able to find anywhere else. We’ve had several customers express their joy at finding it, some literally jumping up and down with it in their hands. Other people have tried it out of curiousity and become hooked – my daughter being one of them. Her house always smells lovely when we walk in despite the two boys, three cats, and the hamster.

I don’t know anyone who doesn’t like the smell of old-fashioned roses. It’s such a shame that the scent is being lost as breeders choose to focus on colour. Whilst our Satya rose incense sticks are popular for good reason, it’s the Stamford Red Rose Cones that people comment on the most. Being a cone, there is no wooden stick running through the middle and therefore no burning wood smell, just a very deep rose. I have to admit to it being one of my favourites, and at only £1* for a pack of 15 cones, each with a burn time of approximately 20 minutes, you can’t go wrong.

Another Auroshikha favourite is Fresh Lemon. This is such a clean, crisp fragrance that is said to help clear the mind and lift the mood. When I first tried it I was worried that it would smell like lemon scented washing up liquid (do they still make that?), but thankfully it doesn’t. It actually smells like real lemon, and being an Auroshikha incense, it’s a slightly more subtle scent that isn’t overpowering.

Known as the Great Masker, this is the one to cover up cooking smells (including fish), as well as other odours you might not want lingering. We’ve been told by our customers that it covers pet smells very well, including cat litter and wet dog, and we’ve also been told it covers the smell of certain products some people smoke. While we can’t promise you that, let’s just say there’s a reason it was popular in the 60s and 70s.

Described by some as the classic incense smell, Nag Champa has always been our most popular incense fragrance. We buy in this fragrance in great quanitities and recommend it to people who are trying incense for the first time. I’m sure there must be someone out there who doesn’t like Nag Champa, but I don’t think I’ve met them. Available in sticks, cones, and backflow cones.

Dragon’s Blood is available in incense sticks and cones, in both the Satya and Stamford brands, but the most popular medium for this fragrance is our Satya Backflow Cones. As well as being a very seductive fragrance, who can resist buying these cones to go with a Dragon backflow burner? It almost seems wrong for any other fragrance to pour forth from a dragon’s facial orifices.

We would love to know which are your favourite incense fragrances. Let us know in the comments.

*Prices correct at time of writing but subject to change. Please check the listing for up-to-date price information.