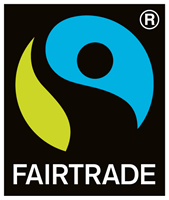 What may appear as an inconsistency could be really irritating to some people, and ordinarily I would be one of those people. You might want to yell, “Just make your mind up!” and I get it. Really, I do. If there’s one thing I appreciate in any writing it’s consistency. So why don’t I get uptight about the seemingly inconsistent “Fair Trade/Fairtrade” and why do I keep chopping and changing all the time?

And while we’re at it, why are some of our products listed as “fairly traded”? Isn’t that just adding to the erraticism (and frustration)?

Well, there are good reasons for this inconsistency and it’s neither preference nor indecisiveness. I’ve written this post in an attempt to explain what those reasons are.

You can find the Fairtrade logo on food items – bananas and coffee being the first ones that pop into people’s minds, but chocolate and tea are also good ones to look out for. It can also be on gold, cotton, and flowers.

You may also see a similar Fairtrade mark with a little arrow next to it, and perhaps an ingredient name. This means that whilst the product itself is not fairtrade, it was made with at least one fairtrade ingredient.

Fair trade, as two words, is used mostly when talking about the issues of fair trade, including products that are made in compliance with fair trade principles but perhaps don’t, or can’t, carry the Fairtrade logo. An example of this would be clothing made by people in good and safe working conditions, who are paid a decent wage.

Many importers and retailers of fair trade items are members of fair trade organisations such as the British Association for Fair Trade Shops and Suppliers (BAFTS), or the World Fair Trade Organisation (WFTO). Near & Fair is a member of BAFTS and in order to remain so, we agree to provide the Association with annual detailed information about where we source our products, how we ensure our own business is run in compliance with the 10 Principles of Fair Trade, and what we are doing to help promote fair trade and ethical consumption. The majority of our wholesalers are BAFTS- or WFTO-registered.

The term “fairly traded” can be applied to all the Fairtrade and Fair Trade products mentioned above, and sometimes in other circumstances. In our own online gift shop we use it to show which items are made in compliance with fair trade principles but don’t carry the Fairtrade mark, and where the importers have chosen not to be a member of any fair trade organisations.

One of the reasons they may choose not to become a member is because there’s a lot of paperwork involved – much more for importers than for us as retailers. Another reason is cost. To cover their own expenses and the costs of campaigning for the fair trade cause, fair trade organisations need to charge a membership fee. For retailers like ourselves, the amount paid is relatively small and is on a sliding scale: the more we earn, the more we pay. It’s a bit different for importers. Proving such a huge variety of products are fair trade is far more complicated than what we have to do, and the sheer volume of products means the fees for importers are higher than for the likes of us.

Some wholesalers understandably like to avoid these additional costs (and paperwork) and we respect their decisions. After all, if they keep their costs down, they can keep their prices down which means we, in turn, can also keep our prices low. We don’t believe buying ethically should be the luxury of a few wealthy people. We think everyone should be able to afford that choice. Plus, the more ethical products are sold, the more pressure is on sub-ethical manufacturers to change their exploitative ways. We don’t sell fair trade because we believe everyone should buy fair trade. We sell fair trade because we believe all trade should be fair.

Of course, any importer can claim to trade fairly and if asked about their trading practices it’s highly unlikely any of them would admit to using exploitative labour. For this reason, before we decide to buy items from any wholesaler who isn’t a member of BAFTS or the WFTO we do a lot of research. We find out when the company was founded, who founded it and why, where they get their products from, and how they keep an eye on the conditions their producers work in. We also enjoy reading our wholesalers’ blogs and seeing photographs of happy workers in their work environments.

Ethical and Made in the UK

When talking about fair trade producers being paid a decent wage we are occasionally met with a somewhat contentious statement such as, “Well, I think people in the UK should be paid a decent wage!”. We agree! That is the reason the National Minimum Wage was introduced, though whether it is high enough is a matter for debate. We also have Health & Safety laws to protect British workers from unsafe working conditions. For these reasons, the term “fair trade” in any of its forms is unnecessary for goods made in this country. We can, or at least should be able to assume that the workers have been paid at least the legal minimum and that they have safe working environments.

Of course, that means we could stock anything made in the UK, but as we like to provide our customers with ethical options we tend to gravitate towards products that are made with respect for the environment, or that give something back to the earth such as our Seed Cards which, when planted, grow into beautiful bee-friendly flowers.

We like to think that when it comes to living ethically and selling ethically-sourced products we’re not doing too badly, but we will never become blasé about it. There is always more to learn, new products to try, and new ideas to share. That, for me, is one of the fun parts of having an ethical shop.

Last week I told you about our new atmospheric table lamps. Next week will be Fragrance of the Month again. I’m leaning towards Patchouli, but we have so many gorgeous fragrances to choose from I could change my mind several times before then.

Take care of yourselves and each other.